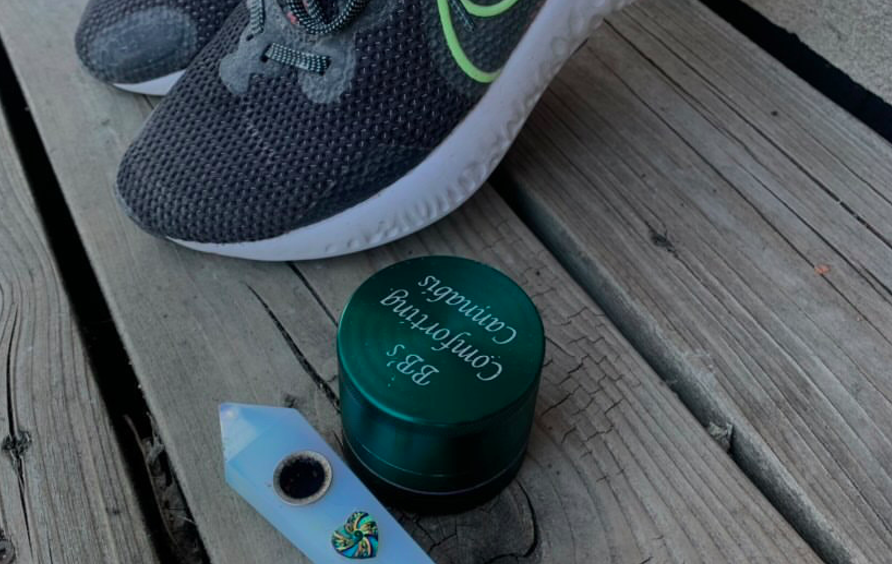 Bryanna Arnold pulls on her running pants and puts on some well-worn shoes to run along the Rideau Canal, where the trees bloom. After tying her laces, she grinds cannabis, puts away the bowl of her crystal pipe, and lights up to enter the area.

As the effects of the weed set in and Arnold took off, she felt relaxed and light. The tension she would feel in her knees without the drugs goes away and she feels like she could run forever.

Many believe that cannabis slows you down, lowers motivation, and makes you lazy. But for others, it is a tool for self-improvement, pleasure and motivation.

The use of cannabis during exercise is a growing phenomenon and its benefits are slowly being recognized.

Canada legalized marijuana in October 2018. Since then, the cannabis industry has expanded into the sports, health and wellness market.

While there have been few studies examining the benefits, consuming cannabis during exercise has the potential to improve performance, pleasure, energy, and recovery time. Observers predict that this will fuel industry growth in the lifestyle and fitness sector for years to come, further reducing the stigma surrounding cannabis.

“We’ve come so far from where we were four years ago,” said Jessica Dalziel, director of clinical services at Canada House Clinics, one of the country’s premier cannabis clinics.

Making a difference with marijuana

Dalziel said she knew she was making a difference in the lives of patients within three months of opening the clinic.

“I was seeing things that I had never seen in pain management with pharmaceuticals,” said Dalziel. “It has been a mind-blowing industry. “

A 2017 online survey by Frontiers in Public Health of cannabis use during exercise among adult users in states that have fully legalized the drug showed that 81.7% of 605 participants approved of cannabis use. while staying in shape. These people tended to be younger and male. After controlling for other factors, the study found that people who used cannabis reported exercising more minutes each week.

The majority of people who used cannabis soon after or before exercise said it improved their enjoyment and recovery after exercise, while about half said it increased motivation to exercise. exercise.

The effects that cannabis can have on a person’s physical condition remains unclear. The Frontiers in Public Health study reported reports suggesting that endurance athletes should use cannabis during training and that the drug may improve performance in other sports as well. This potential has prompted the World Anti-Doping Agency to ban the use of cannabis in most sports until more information is known.

Logan Rogers, a personal trainer, said he has had a few clients who regularly train under the influence, but has no problem with it benefiting them.

“Trainers know how to design good programs, but the best program is one that the client can take and will take,” Rogers said. “For some, taking cannabis out of the equation can hurt their chances of coming back. So if they need it to come to train, I’m 100% against it that they don’t come at all.

Alison Becker began using cannabis to relieve some of the discomfort in getting back into shape. It is now a common part of his fitness routine.

“I am fusing cannabis with my running, hiking and long-distance bike rides – but not all the time,” Becker said, reflecting on the importance of keeping his tolerance low. “When cannabis engages in my practice of movement, I feel that time and space dissolve. I feel connected, immersed, invincible.

While cannabis has many benefits, experts say overuse can have negative effects and these should not be downplayed. They advise knowing your limits and starting with modest goals.

Arnold, university student and creator of @ comforting cannabis Instagram page, recommends sitting down, having water and / or something to eat in case of overconsumption.

The method you choose to get high depends on the type of high you want to experience while exercising, Dalziel said. If you’re looking more for a cerebral high to change something in your state of mind, she recommends spraying dried flowers. If you are trying to combat physical pain, she encourages oral consumption as it will give a fuller body effect.

Because cannabis is a natural plant, Dalziel encourages people who take any type of energy supplement to try it. If you’re unable to exercise due to physical pain, she said she thinks it’s worth trying cannabis as well.

Finally, she encourages people with sports-induced asthma to incorporate pinene – a component of some cannabis strains that helps with breathing – into their routine.

“There are components in cannabis known as terpenes – and one of them specifically that I use is called ‘pinene’. It’s a phenomenal bronchodilator, so using this specific plant component can help your breathing, ”said Dalziel.

A bronchodilator helps open the airways. And pinene is also being studied as an anti-inflammatory that could help people recover.

Because Dalziel does half marathons, to eliminate her pain after running, she uses “Delahaze” oil, which is a sativa-based cannabis strain with high THC content and high pinene levels.

“I can’t say that anyone will feel the same effect,” said Dalziel, “but I don’t feel pain in the body and I feel more energy when I take it. If I run without it, it hurts and my ankles hurt afterwards.

Brad Poulos, educator and founder of the ‘Basics of Cannabis’ course series at Ryerson University, said he believes cannabis pain relief will attract non-cannabis users to the industry. instead of the combination of exercise and cannabis.

More “reward” than a tool

Poulos said there has been progress in finding strains for rapid pain relief, noting that some arthritis patients use CBD oil to help manage pain. He expects such uses to become more common.

For Becker and Arnold, the combination of cannabis and exercise is liberating and relaxing as well as relieving pain. They say it helps them pay attention to how their body is moving and manage their breathing.

For others, like Ben Kaplan, CEO of I run magazine and a freelance journalist who often writes for the National post, consuming cannabis with exercise is more of a reward than a tool.

“Personally, I don’t put the two together like that,” he said. “I have it before and I didn’t like it. For me, it’s more of a separate thing. I will do the job and then I will earn this award.

But others take advantage of the combination. “It really shows that cannabis can add more value to people’s lives than some realize,” said Jake Crow, the founder of BudTender, a canna tech company that was recently sold to an American company known as the name of SpringBig, where Crow now works.

In 2018, Becker and his partner embarked on a cycling trip across Canada called The Good Vibes Tour Powered by WeedMaps. The goal was to help break down the lazy stereotype of cannabis users and demonstrate that weed can be part of a healthy, active lifestyle.

The two cycled from Victoria to Halifax with the support of WeedMaps, an online platform that has been called the “Yelp” of the cannabis industry. WeedMaps has made a name for itself in the sports world by also supporting athletes on their cannabis and sports related journeys.

Arnold and Kaplan said they believe cannabis use may become as common and normalized as alcohol use is today.

While cannabis advocates look to the future with an open mind, they are cautious that what works for one person may not work for someone else. But Becker is convinced of the health benefits of cannabis.

“Because of my relationship with cannabis and the movement having such a positive influence on my life, I was able to completely change my life,” Becker said. “People who knew me seven years ago sometimes don’t even recognize me today, the change has been so profound.”