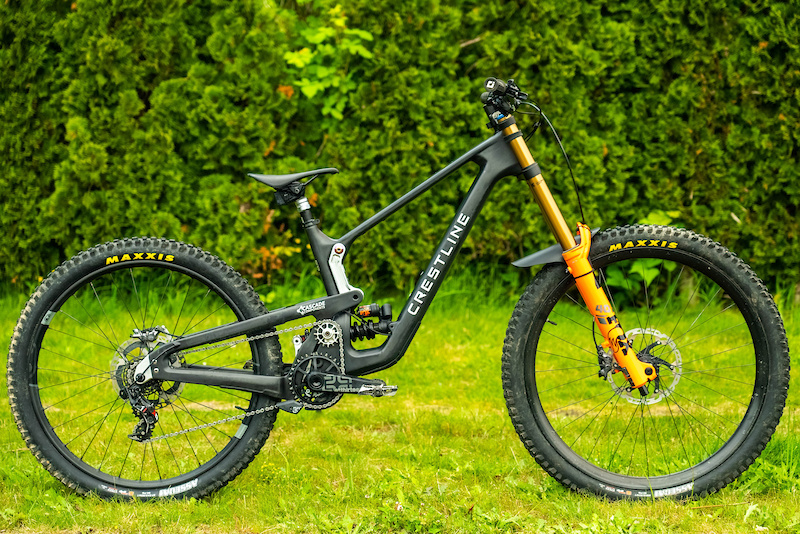 You may have seen some photos of the Crestline and Cascade Components RS 205 VHP bike floating around this summer, and we got a chance to get a few laps on this bike before it even made its first public appearance. Before rolling out the “looks like a Santa Cruz” comments, this bike uses a mid-high virtual pivot point with a turnbuckle and accommodates a 29- or 27.5-inch rear wheel.

A rapid production method enabled Crestilne and Cascade to complete the project in less than a year. Final pricing and shock options are yet to be confirmed, but the RS 205 VHP will retail on Crestline’s website for a retail price between $3699 and $4199 with or without a shock (international customers are asked to contact [email protected] for shipping details).

The whole project is a conglomeration of ideas like Crestline’s desire to build a downhill bike, but also their affiliation with Jimmy Davis of Cascade Components, specialists in virtual pivot adjustment.

American downhill racer Neko Mullaly was also involved when he contacted Cascade to make the links for his Frameworks project. Even though Neko was too involved in the design process to partner with this duo, he shared the breadth of knowledge acquired during his successful downhill racing career.

Starting from their VPP eMTB, Crestline had the opportunity to produce a downhill bike relatively quickly thanks to advice from carbon frame manufacturer giant VIP. The RS 205 VHP will be limited to around fifty copies initially because the chassis will be made using a “prototype mould”. This means the turnaround time from CAD drawings to extracting a carbon triangle from the sarcophagus is reduced compared to higher volume production runs, however, the number of frames this mold can handle is reduced before its integrity is compromised.
Frame details

VPP is Cascade Components’ suspension design of choice for its adjustability. Minute changes in pivot placement can alter kinematic characteristics such as axle progression and trajectory. The RS 205 VHP was built with a mid-high pivot location so the rider’s balance isn’t upset by a continuously extending rear center. There is some rearward movement at the start to smooth out small chatter, but on larger impacts a progressive linear leverage curve kicks in to reduce bottoming out.

Even though the RS 205 VHP is labeled as a DH race bike and there are no dropper post cable guides in the frame, a steep seat tube can accommodate a wireless Reverb AXS post. Adding to the adaptability of this 205mm travel chassis, the interchangeable dropouts can accommodate any popular wheel size. The whole package isn’t too far off from the Norco line, although Crestline and Cascade offer the custom parts for everyone. Have you spotted the water bottle and tool bosses inside the front triangle? If this rig is going to double as a park killer, why not have those resources on board?

Chain growth is only a factor up to the point of sag, but a two-position tensioner sits on the mainframe and can alter the amount of anti-squat the rider is looking for. Part of the reason for the multiple positions is to allow the use of a wide range cassette.

In total, Cascade manufactures the raw aluminum, counter-rotating links, pivot hardware, idler wheel and dropout, highlighting the exclusivity of this frame. Other finishing touches include a fender-protected shock eyelet bearing and chain guard on the seatstays and under the downtube curve.

The head tube, which sits at 63°, uses a 56mm diameter straight opening so the 480mm reach can be adjusted in either direction by up to 10mm. Of course, there is also the possibility to play with the angle of the head tube and to mount a single or double crown fork in complete safety.

The 445mm chainstays fit in well in terms of front-to-rear center balance for the majority of rider preferences, but as always, the custom CNC dropouts could push those numbers further.

Considering we only had time to ride the S 205 VHP in downhill configuration, the jump tracks and rougher tracks of Whistler Bike Park were the obvious choices for the proving grounds.

Troydon from Crestline Bikes was incredibly helpful in delivering the bike with not one, but three shocks; a Fox DHX2 and two Ohlins TTXM22, all with different spring rates that allowed for quick changes and experimentation. After playing around with all of these options and getting advice from Jimmy, I settled on the Ohlins shock and 480lb spring rate.

Jimmy and Troydon hid the geometry and kinematics from me, which is definitely the most honest way for every participant to test a bike, but getting up to speed on the RS 205 VHP took no more than a ride or two. I would put that down to the feel of a high stack height and progressive kinematics well supported by strong compressions.

I’ve ridden a large library of bikes before, but there were two highlights that I wouldn’t have guessed correctly: the 63º head angle and the mid-high steerer location.

Much like the Intense Tracer 279, which was recently featured in a field test and also uses a VPP design, the RS 205 VHP seemed to ride a degree stiffer. Under braking, however, the RS was much more collected. By changing the spring to a softer 457 lb option, I thought the bike might settle farther into the travel and ride a little looser, but it didn’t. On the trail it felt almost identical to the 480 spring, but used the first half of the travel much sooner. Despite what the number said on paper, I still wished the front axle was further forward and carried the load into the bomb holes of the bike park.

What I was getting along with was that the RS 205 VHP had no forward weight transfer as it moved through the travel, like some high-pivot bikes do. Still, the bike retained excellent small-bump compliance. Under braking, the RS held steady and didn’t lift from the stroke, making it predictable to pull hard on the brakes and slam quickly into a tight turn.

When it comes to the finish and overall package of the RS 205 VHP, Crestline and Cascade have put together a solid bike that begs to be ridden lap after lap. All hardware stayed firmly in place and no chain was lost from the tensioner, however, more noise cancellation could be added to the rear triangle. This is something Troydon talked about and added the option to buy VHS tape and STFU chain shocks with the frame.

Otherwise, the clean lines and fine CNC work complete a bike ready to tackle tons of bike park action. We’d love to get our hands on an RS 205 VHP for a longer-term review when it’s time to play around with the full range of wheel and suspension setups. It’s definitely a bike that could be modified to be raced on Sundays and still play in the bike park.