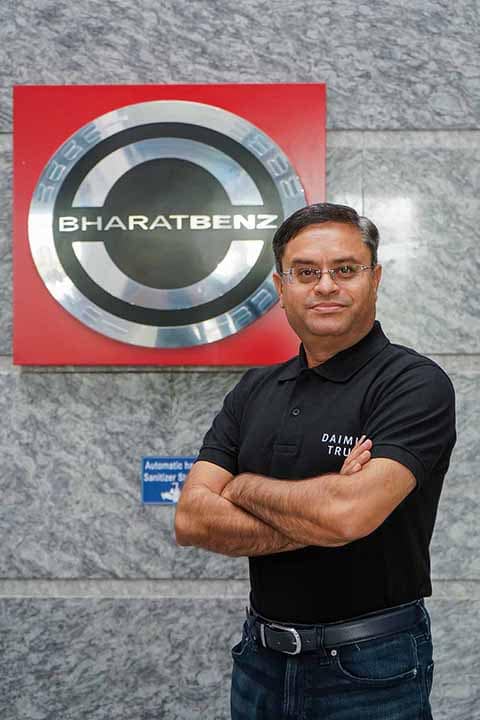 In a direct interaction, Satyakam Arya, Chairman of CII, State Council of Tamil Nadu and Managing Director and CEO of Daimler India Commercial Vehicles, speaks to Ashish Bhatia over Tamil Nadu, finding favor in industry and contributing to India’s economic growth rate. He also salutes a successful decade of operations in India.

A: The market has slowed due to slowing GDP growth, and it is now back on its feet. This leads to new demand and the movement of goods, and therefore a demand for trucks. The second important aspect is that in 2019 itself the market had started to slow down. First due to the transition to BSVI, then due to Covid-19. So it’s been three years, which is a very long period of unreplaced fleets. Now, while GDP is growing relatively healthier, there is increased demand for the movement of goods. All fleet owners come back and buy new trucks. This is a major dimension that unfolds before us.

The second dimension, which we will see in the future and which will have an impact on the CV industry, is the disposal policy. The policy has been rolled out but as the infrastructure develops, including scrap centers and test centres, it will have a good boost on demand through fleet renewal. The third important dimension is regulation. After the transition to Bharat Stage VI, we are preparing for OBD II, safety regulations are aligned and these will also influence the industry in the future.

The other stand-alone dimension is the whole infrastructure itself. We have seen the government invest aggressively in infrastructure. Whether express highways or multimodal logistics parks. These will have an impact in the medium and long term. People will prefer trucks that can reach higher speeds, which translates to higher horsepower for better turn around time (TAT) and lower total cost of ownership (TCO). This will mean that the entire product portfolio will move in this direction. With the emergence of multi-modal logistics parks across the country, we will see a sharper differentiation between light, medium and heavy trucks which currently falls short of global benchmarks.

The next big impact as a ripple effect will be the cost of logistics in India, estimated at 13-14% of GDP. This should settle somewhere in the region of 8-10%, which would be on par with Germany, for example. These are some of the factors that influence the structure of the industry as a whole.

A: There is an increase in the number of people embracing gas. We all know the reasons. There is an increase in the price of diesel and there is parity with gasoline. So even if the product does not deliver the same horsepower or torque, people are willing to compromise to reduce their running costs. I believe India is charting its course away from diesel or gasoline. It’s a mixture of mixed fuels, it’s a mixture of gases, whether it’s compressed natural gas (CNG) or liquefied nitrogen gas (LNG) and eventually it will be both electricity and hydrogen. In the medium term, I see India moving in these directions, but in the long term, I see many of these fuel options as transitional options. This means that eventually, in two or three decades, we will settle with the final solution which could be a mixture of electricity and hydrogen.

A: Safety is deeply rooted in our value system. Whether it’s our manufacturing plant, our operations or our products, we have always been the best on the bench and have defined the evolution of the market. As a testament to this, when we entered this market just 10 years ago, we decided that we would only have well-engineered, factory-fitted steel cabs. I remember at that time the whole CV market only had about 20% penetration on the front end. 80% of the market consisted of hooded trucks which then went to a bodybuilder to be fitted with a wooden cabin. I think we both know how dangerous this product is when it leaves the factory. It’s a half-built cabin.

I struggle with the fact that India is the only market that now has a product that meets Bharat Stage VI emission standards, on par with global benchmarks or a step behind, but when it comes to safety we have a long way to go. Even now, an estimated 40% of trucks sold in this market are hooded. It is high time for the government to act. The whole society and the industry are acting accordingly and saying that we don’t deliver what we consider dangerous even if it complies with the regulations. We must go beyond. I believe compliance is doing things right, but integrity is doing the right thing. This has always been a firm belief and we will continue to do so.

A: There are a lot of learnings and there are no two ways to get there. I believe we have been successful in delivering on our promise on many fronts. We started by promising to deliver products ahead of the market. They are more fuel efficient, leaders in total cost of ownership and will set new benchmarks in safety. We have delivered on each of these fronts. To give you an example, every time I meet my clients they tell me that if a fleet owner has a BharatBenz and other brands, the driver has a natural inclination to drive first. They don’t want to drive another brand. Even on vacation, they make sure to collect the BharatBenz key when they return. It’s their way of expressing their love for the product.

By focusing on technology leadership, we’ve also transformed the resume market in many ways. We will continue to fight for this. It is rooted in BharatBenz and we will never change course. So what will change? We also supply to 50 markets worldwide. Going forward, the focus will be on deepening these markets. So, while we are developing products for India, we will also continue to explore new markets and consolidate our position also with regard to exports. On the future technology front, we are working internally on fronts such as mobility as a service (MaaS) and preparing for what lies ahead. In short, this will mean different fuel options and will also help us deliver mobility as a solution rather than just a product in itself.

A: Many do, but not everyone. When we entered the market, we came with the logic of total cost of ownership (TCO). We used to sit in front of the customer, understand the whole operation and calculate the cost, for example, over five years. The idea is to explain, that if you buy a BharatBenz, with a slightly higher price than the competition, you will save a lot more in a very short time. This is attributed to better fuel efficiency, better TAT and also increased security. We have concluded that customers believe in this ideology. Today, customers are proactively asking for solutions to achieve better TCO. In one exercise, we looked at our entire customer portfolio and found that on average someone who buys a BharatBenz, for the first time, buys two trucks. The second time, the same customer buys eight trucks. The third time, they buy an average of 22 trucks. This tells you that Indian customers are very cost conscious, but also understand what is delivered as a whole over the long term.

A: I remember very well that I was once on the way to the factory here in Oragadam. It was just after the first confinement. At that time, we all had apprehensions about getting out of the home culture work and how it would play out. We have done everything possible to ensure the safety of our people. It was then that I read this Malaysian proverb, I found that it was closely correlated to the situation encountered. Peace is akin to markets closing, so there was less to sell and therefore considered a peaceful time. I decided that we must not relax our efforts and that we must pursue our medium and long-term strategy and not deviate from it. It was time to do more so that once the crisis passed, you would find yourself better prepared. I am happy that we have been able to carry it out over the past two years.

A: I have very strong conviction and confidence on two fronts. As Covid19 subsides, India will emerge with the highest economic growth rate in the world. In India, Tamil Nadu will be the number one state. We already rank second in terms of GDP after Maharashtra and with all the efforts of the government and the entire industry, Tamil Nadu will be a major attraction for multiple sectors of the economy as far as new investments. We’ve seen some of these announcements happen; we have seen our Honorable Chief Minister lead with industry engagement and dialogues to understand their needs and engage with them, the desired ecosystem to deliver.

Heart Health ‘The 8 Essentials of Life’