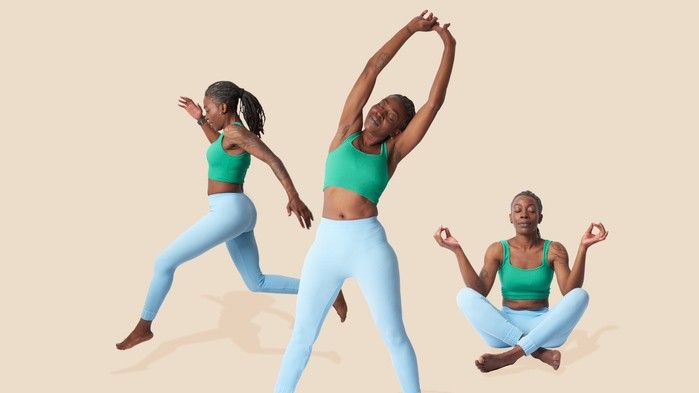 What are the different components of fitness

Although we can generally refer to ourselves or someone else as being fit, there are many components of fitness. It’s a general term that doesn’t have the specificity you might need to improve in your sport or athletic discipline.

For example, exercise physiologist Tom Cowan (opens in a new tab) notes the need for those playing the same sport, but in different positions, to have various fitness components to very different degrees.

“Speed ​​may be a key requirement for a striker in football, but not so important for a goalkeeper,” says Cowan. “Agility may have a more determining role in the level of performance of the ‘goalkeeper’.” Workout plans with effective full-body movements (hello best rowers (opens in a new tab)) are great foundations, but when we look at the components of fitness, the need for specificity comes into play.

“It’s important that we don’t focus on just one of these areas, but rather try to improve our fitness holistically, thinking about training to improve each of these areas. The training programs should integrate training for the different components of fitness because they have different benefits for the body,” explains Cowan.

In the following article, we’ll explore these benefits, along with explanations of the different components of fitness, and divide them into two main categories along the way: health and skills components.

Tom is a Registered Clinical Physiologist with the Registration Council for Clinical Physiologists (RCCP). He is accredited by the British Association for Cardiovascular Prevention and Rehabilitation (BACPR) and the Register of Exercise Professionals. Tom holds an Honors degree in Sport and Exercise Science from Loughborough University, is a Wright Foundation Specialist in Cancer Rehabilitation and is BACPR qualified in Cardiovascular Prevention and Rehabilitation.

“Cardiovascular endurance can be described as the body’s ability to transport oxygen during sustained exercise,” says Cowan. It is best exemplified by an individual’s VO2 Max, the maximum volume of oxygen you can take in, transport in your blood, and use in your muscles.

“Cross-country skiers typically have some of the highest VO2max values,” says Cowan. “This can be explained by the fact that cross-country skiing requires the contraction of several large muscle groups throughout the body, which places a great demand on the cardiovascular system to supply all of these working muscles with blood and oxygen. which they need to contract repeatedly.

Building up your cardiovascular endurance can help reduce the workload placed on your heart, while reducing the risk of developing health problems, such as cardiovascular disease, hypertension (opens in a new tab) and diabetes.

There might even be a better time to train (opens in a new tab) to help support cardiovascular training.

Flexibility is the range of motion of a joint or group of joints, or the ability to effectively move joints through a full range of motion. Obvious choices for improving your flexibility include yoga, Pilates, and gymnastics.

Flexibility is primarily tested by the sit and stretch test, in which the individual sits on the floor with their legs straight and feet pointing toward the ceiling against a box or table, on which a ruler is seated measuring how far forward you can reach. Increased flexibility can have a positive impact on the next two components – muscle strength and endurance – while an increased range of motion is key in injury prevention.

“Muscular endurance is the muscle’s ability to perform sustained work,” Cowan explains. In other words, it’s being able to contract the muscle repeatedly – ​​like a bicep during a curl for example – for an extended period of time without getting tired.

“Training to improve muscular endurance typically involves performing resistance exercise for more reps at less resistance,” says Cowan. He recommends no more than 15 reps for each set to help the muscle resist fatigue, while minimizing rest time between sets.

In contrast, muscle strength is the muscle’s ability to produce force against resistance – in other words, the weight you can carry – so to build for this component you’ll want to increase weight while lowering your count. of repetitions.

“By adjusting the volume (reps) and intensity (resistance/weight) used in a resistance exercise, you can target training to stimulate an improvement in muscular endurance or muscle strength,” says Cowan. “For muscle strength training, rest periods need to be longer between sets to allow the muscle to recover enough time to be able to produce powerful contractions in the next set.”

Want to get insight into your own body composition? Find out how body fat is calculated first.

The definition of agility is controversial. A 2005 review in the Journal of Sports Sciences (opens in a new tab) provided that he made consensus around it, defining agility as “a rapid movement of the whole body with a change of speed or direction in response to a stimulus”.

This stimulus could be a shot at a football goal, for example, where a goalkeeper must be agile to react and move their body into a position to keep the ball out of the net. Agility is a skill that is important in many sports, and as such agility training is an important part of an elite athlete’s training plan. Plyometric box jumps, shuttle runs, and cone weaves are all moves that can help develop agility.

The Illinois Agility Test (opens in a new tab)is arguably the most recognized test for assessing agility. And sees the individual begin the course lying face down near the first cone, before running and weaving through a series of cones in a set order until they reach the finish line.

Balance is a component of fitness that relates to your ability to maintain control of your body position. Balance can take dynamic and static forms. The latter can for example hold the handstand in yoga, while the former can refer to something like walking or running, or to a more complex form, such as managing to keep moving after being tackled.

Balance is important in sport and in everyday life. “Balance training can help reduce your risk of falls,” says Cowan, “which may be especially important for older adults.”

Coordination is the ability to use two or more body parts together. It’s about selecting the right muscle, at the right time, with the intensity needed to carry out the action. Coordination is especially important in sports that require you to hit a ball, such as cricket, tennis, and golf.

Our own coordination comes down to the efficiency of our motor skills, which can be divided into fine or gross. Fine motor skills relate to our coordination in relation to small movements, such as a pool stroke, and the ease with which they are executed, while gross motor skills involve large movements and muscle groups.

Power is the ability to apply maximum force as quickly as possible. The two components of power are strength and speed (which in themselves count as a component of fitness), and power can essentially be thought of as strength at speed.

For many sports, power is needed more than strength or speed per se, but power alone will not directly translate to good performance (this is true for all components of fitness). The perfect example of power on the gym floor is in an Olympic lift like the snatch where the athlete must quickly move a heavy barbell stacked with weights.

And finally, we come to reaction time: how long it takes you to respond to a stimulus, like a boxer’s ability to react to a punch. This is strongly tied to your mind-body connection, with your eyes seeing the stimulus, your mind then interpreting it, and your body reacting in accordance with that interpretation. Experience plays a big role in reaction time, as you develop the knowledge that then allows you to react faster and more accurately to the stimulus.